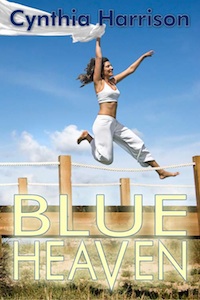 She knew it was him before she flicked on the porch light and turned to see his black Lexus in the driveway. She stood outside her door, waiting for him.

“Hi.” He smiled at her, but his face held concern.

She wondered why he’d come back, but her voice had shut down. Had he known, after all the strength she’d shown in resisting him, that tonight she’d feel naked and needy? That, after Marcus, and Lily, she felt stripped somehow, right down to her lonely, yearning soul?

“I worried maybe Marcus had come back. Just wanted to check everything was okay.” Daniel reached out a hand and laid it on her arm, just above her elbow. She felt the warmth of his touch right through the sleeve of her shirt.

“No, he didn’t.” She shook her head, trying to shake off her vulnerability, too.

She was fine about Marcus. Seeing him today had made her realize that, at least. She was over him, without regret.

“It was harder than I thought to let Lily go,” she admitted.

“Fine. They’re close. Lily is where she needs to be.”

Eva shivered when Daniel dropped his hand from her arm.

“Well, if you’re sure, then,” his words said goodbye but his body stood still, the two of them encased in the glow of the porch light.

“Want to come in?” She opened the screen door.

“Sure.” He relaxed into a comfortable ease, making her realize he’d been worried for her. Not the project. Not the Bryman legacy. Her. This was personal. Daniel cared about her.

As they went through to the living room, she snagged a bottle of cognac someone had brought to the party. She didn’t have any fancy crystal snifters, so the clear plastic glasses she’d used for the punch would have to do.
“This is nice,” Daniel said, toasting her with his drink. “Just us.”

“No teenagers,” she said, the taste of the liquor, heavy as honey, strong on her tongue.

“We sound like old people,” Daniel said, then laughed.

Her heart twisted. To grow old with Daniel. The idea was as sweet, deep, and mysterious as the cognac. And, like the liquor, it went right to her head, making her almost dizzy with longing.
But Daniel had made it clear he was finished raising his family. There would be no growing together for the two of them. And yet, here they were.

She looked at him. His eyes searched hers. She couldn’t think straight. Her mind tumbled out random firings, the way his shirt held the smell of the rain, the way he smiled at her as he reached out to pull her close, the feel of the denim of his shirt as she put her arms around his waist. Her last thought before he kissed her was that he wanted her in that simple, uncomplicated way that men wanted women. And right now, she wanted him, too.