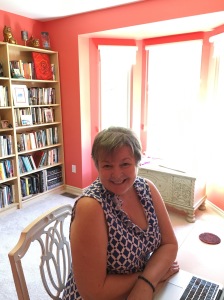 Building a new character from the ground up starts with a name that may or may not change. Or maybe an occupation. Not sure which came first for me with the work in progress, but I had those two things very early on. There was no reason I chose my main character’s occupation other than I thought it would be a great job and it would fit into my plot. I knew there’d be research, but it would be research I’d enjoy.

I don’t know much about art, but my character does. How I made that relevant to the plot is that the murder victim is an artist. One thing I do know about art is that I like it. Not all of it, but I feel a strong connection to some artists and their work. The art world and the literary world are similar in that both disciplines require the pupil to separate the artist from the art. I’ve never been able to do that. I am as fascinated by writer’s lives as I am their works. Also musicians and their music. I want the whole picture. It’s a way to connect on a deeper level.

Writers need to connect to their characters in a similar way. A main character who has depth is always preferred to a stereotype. The way you give your character depth is to inhabit their space, physical, mental, and emotional. The new character grows and gains depth as you add to her store of knowledge and her way of navigating in the world. Sometimes, the writer must search this out and sometimes it drops into our laps like good luck.

That happened to me today when I watched Hannah Gadsby’s stand-up comedy show “Nanette.” Hannah, like my character, is an art history major. She jokes in her show that she wants to quit comedy because her self-deprecating comedy feels safe, like she’s keeping her self-hatred in a box. Hannah has a whole fascinating and tragic backstory she slowly reveals in her show through jokes. And sometimes passionate angry shouting. She deconstructs comedy by illuminating its two-part system. First, there’s the tension (the set up) and then there’s the relief (the laugh). She says this is connection. Her way of connecting to other human beings. She does it very well.

One of her recurring jokes is about quitting comedy (tension). That’s always the first line, but she changes the rest of it with each bit. Once after she says she has to quit comedy she then ponders how she’ll make a living if she’s not a comic (more tension) because she’s an art history major and there are no jobs in that (laughs). Then she goes on to joke about Van Gogh and Picasso in a witty resonating way.  She’s not just witty. She’s deep. She goes into her history of “soaking in self-hatred” and takes her audience with her as witness, summing up by saying “There is nothing stronger than a broken woman who has rebuilt herself.”

Suddenly I had new questions to ask myself about my character. How had she been broken? Had her career dried up? Had she decided that her career required too much swallowing of bile? How would my character rebuild herself? Would I show her brokenness in flashback? I tend to not like flashback, so how could I insert this breaking and healing into the smooth linear narrative I prefer? I’ve just given myself quite a bit of homework. Quite a few chapters begging to be written. Depth to be added.

Isn’t it funny how books are a smooth narrative and life is a bumpy ride? That’s probably why I almost prefer books, both reading and writing them, to my actual life. Character driven writing is the straightest line of connection for me. Hannah talks a lot about connection, too. About her need to connect and how she found that for a time through comedy. The biggest part of life, for most of us, is about finding ways to connect. And for writers, connecting to a  character in a deeply meaningful way leads to connecting to readers who are also searching for connection, thus completing the circle.