The eloquent George Thorogood said it best, though he was talking about alcohol, not ink. I write alone, with nobody else. You know when I write alone, I prefer to be by myself. One of the myths I believed when I was a young starry-eyed writer was that working alone had integrity. Took grit. Was tough, but I could take it. Then I came to depend on it. I didn’t want to write even if someone was in the same house.

That’s not how write-ins work. At a write-in, you write with other people. Like the people who go to coffee shops to write. Or when your teacher gives you a timed writing assignment. Other people are key to the write-in, which is why I never bought it. Too many distractions. Serious writers work alone. I still believe that’s true–for me. Maybe not or everyone, say Natalie Goldberg or Jennifer Weiner, who famously wrote in coffee shops and went on to sell billions of books.

Because I write alone, I never went to any write-ins. I thought these things were crazy, or maybe it was me. But then about a year ago I joined a brand new writing group and yesterday they hosted a write-in after their board meeting. In Big Boy. I love Michigan Sisters in Crime and not just because they gave me a coffee mug. One thing new writers hear all the time is “join a writing group” and I took that advice early on. Join a group that fits where you are (or where you want to be) in your writing career. 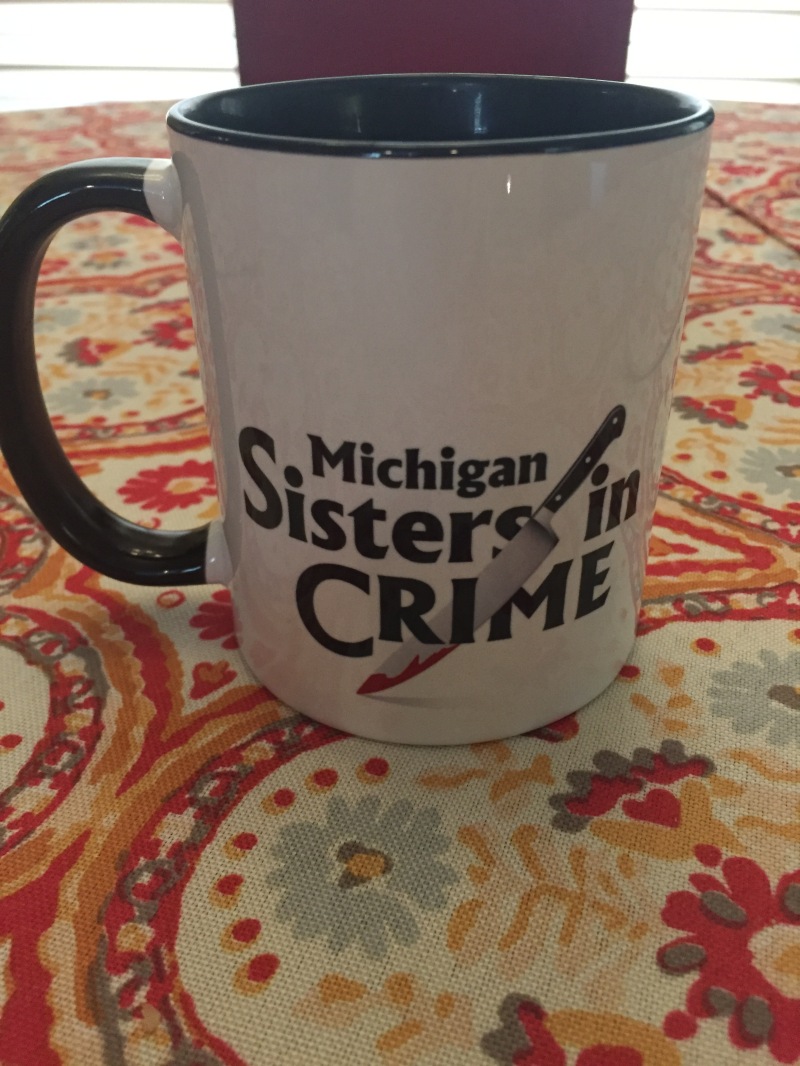 I’ve belonged to four or five groups through the years, depending on where I was with my writing. A writing group helped me find my publisher. Well, one person in that group. We got to talking and she said “You should try The Wild Rose Press.” I did, we’re together now, and it was because I was in a writing group, at a meeting. It’s not enough just to join, you need to attend meetings. Sisters in Crime is a national organization for crime writers. They have 52 local chapters. It’s the chapter meetings where you’ll find your peeps (and maybe a lead on a publisher or an agent).

I am so grateful to my writing group. They do so many things to help my writing. Like our visit to Jackson prison sparked an idea for the plot I am slowly building around my work-in-progress. I’m preparing for a book release in a month, so I don’t have my usual daily novel writing time. These days it is all lining up the publicity and checking promo to-dos off my list. I have hired help plus I’m retired from my teaching job, and still, right now, finding novel writing time is hard. Thus, when my writing group held a write-in, I packed my supplies and went.

The write-in started promptly after the board meeting. Nobody (there were eight of us) talked for an entire hour. I wrote steadily, because I’ve been thinking over this scene since the visit to Jackson. I also had a prop, a postcard I bought there that fit neatly into my story. You can see from the postcard there’s a lot to describe, so I got two warm-up pages out of that. My character has just received this postcard and sees it as a threat. He has good reason to look at it very carefully and therefore I do, too. After that, he had two conversations about the postcard with two different characters, so there was dialogue and tension and thwarted desires and all the other business that makes up the words in a book.

I got six pages in an hour. And I said so! A few people said wow or seemed impressed but nobody else said how many pages they got. Maybe it’s not cool to announce your page count. Or to say, as I did at the cash register “I guess I won.” I maybe heard someone mutter “yes you did” but I’m not sure. Everyone was nice, but still, I think probably announcing your pages is not a part of a write-in. What got me those six pages was a combination of being prepared with my favorite top bound spiral notebook and Dr Grip gel pen. Also thinking a lot about the scene I wanted to write before I wrote it and having a prop to get me started.

There were some distractions. It was Big Boy. Music from the 80s. Not too loud. Someone humming. The person bussing tables stopping by wanting to chat about writing because her mother reads books. We all stopped writing and listened politely to her. Everything else I just blocked out. Even when I liked the song, I kept writing my sentences that built my scene. And because of the write-in, I have something for the August meeting of my small critique group, which is meeting three days after my new release, so probably I’d have been too busy to write the scene if I hadn’t taken a time out for a write-in.