Just returned from an ambitious trip I hoped would help me define my 60s, show me how to take a big step forward in personal development, and shower me with love. It did all that and more, but not without a bump or two. I live in Detroit and the trip would involve three airplanes, one B & B in Seattle’s Capitol Hill, two guest rooms (one in each of my sons’ homes) and a hotel room in L.A. I’d be changing planes four times. Lots of hustle bustle but I was undaunted, excited. 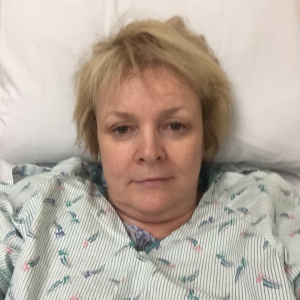 Then a funny thing happened on the way to my meticulously planned adventure. The plane hadn’t even lifted off the ground in Detroit when I stood to switch seats with someone and turned my leg but not my body, resulting in a painful pop of my knee. Then it buckled. I sat in my new seat, only a little worried. My knee didn’t hurt, not exactly, until a little later when I got up to use the little phone booth the airlines call a restroom. I couldn’t put any weight on the knee without pain and that annoying inexplicable thing where it collapsed, ceasing to hold me up as it has all these years.

Two flight attendants were at my side, helping me to my seat, arranging for a wheelchair at the gate. They could not have been kinder. They even wanted to phone a medic to meet the plane but I said no. My son was in Seattle and he’d be getting off work right about the time I arrived at my B & B. I just wanted to get there and stretch out my leg and see what Mike thought I should do. My husband had already weighed in via text saying I should go to the ER. Mike thought so too and sent a Uber car to take me there. It arrived in five minutes! 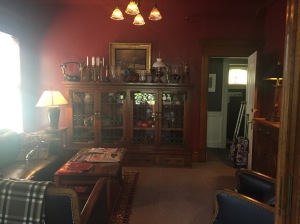 Oh, my B & B was beautiful. I didn’t want to leave it for an emergency room visit but I did because it was the right thing to do and I anyway I was still hobbling. I texted Laura, my friend holding the Desire Map workshop I was scheduled to attend that night. I told her what had happened and that according to the ER nurse, I’d be getting pictures snapped of my knee at the time of the event. I said I’d see her the next day. My plan had been to walk from my B & B to hers, which is why I didn’t stay with my family, but that wasn’t going to happened as I had been issued a leg brace and crutches and complicated instructions for icing and elevating my sad little knee. They offered me painkillers but it really didn’t hurt, and I’m a baby about pain. This wasn’t physical pain, just annoying, intrusive, exhausting.

My son picked me up from the ER and we had dinner downtown. This was May Day and Seattle has a long history of protests of all sorts on that day: a workers free-for-all. I’d heard about it from my cab driver, my Uber guy, and the B & B host. From what I gathered there were three things: immigration (they want to make it easier for people to live and work legally here) Baltimore (showing solidarity for our African Amercian men) and one more thing I can’t remember. I do remember the surging crowds of protestors and the police in riot gear as my son drove through the Capitol Hill and downtown neighborhoods. Everywhere we turned, it seemed, we were cut off by barricades or police on motorcycles who seemed determined to block every street with a restaurant. 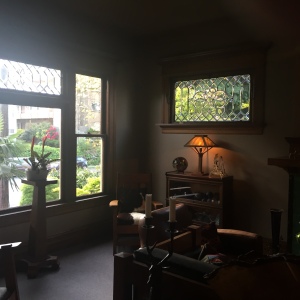 We did finally eat and got caught up with each others’ lives. A gift of the knee injury: dinner alone with my son. Something so rare I don’t remember the last time it happened, but probably a decade. It was quite splendid despite the crutches and the leg that had to be propped on a chair. Back at the B &  B, Laura had left a text saying she would pick me up early the next day for the full nine hour Desire Map session. I was ready.

The workshop changed me from the inside out. I’ll write more about that another time but for now I’ll just say WOW. I got what I came for, and way more. I retreated to my lovely B & B and was picked up the next day by Mike for a day of Owen, my grandson. He is a joy! Mostly what we did was sit him on the floor and watch him play, giggle, scoot around in a semi-crawl and perform other antics for our viewing pleasure. It was a gorgeous day–Seattle is so green just now, its flowers large as plates, lush and vibrant. It was the kind of day that begged for a walk, but my condition had us settle for an hour on the deck with the sun shining down on u through those impossibly green fully leafed out trees. Then we went out to dinner and Owen really liked the guacamole. 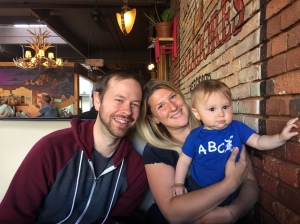 The next morning, Mike took me to the airport, where I was catching a flight to LA, meeting Al for a hotel rendezvous. I checked my bag curbside, they wheeled a chair out to me, whisked me through security, upgraded my ticket to accommodate the leg brace, pretty much pampered the heck out of me. Also the same in LA, where the wheelchair attendant crossed six lanes of traffic to get me to my waiting husband. I was now an expert at tipping airline personnel. They are golden.

Al and I had cocktails at our hotel pool, located on the roof in direct eye line of incoming planes. The palm tree background made it all seem like a wondrous moving postcard. We had a romantic dinner where I basked in the sure knowledge that I was not alone anymore. Many people had fetched me ice and cool drinks and pillows as I navigated my trip thus far, but nobody beats the guy you’ve been married to half your life for true comfort. I was never so glad to see him. 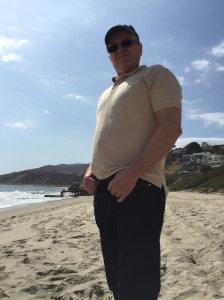 The next day we were on the road to Ventura and our NEW grandson, just a month old. I’d had, at one point, a grand plan to walk that baby until I wore out the floors, but instead I settled for lots of lap time. Ben is an angel. He has Tim’s blue eyes and I suspect he’ll get Alicia’s dimples. He’s smiling already and very alert. He knew me instantly. Babies are incredible that way. Ben had been my primary reason for coming west. Trick knee and all, I was very glad to meet him in person for the very first time. 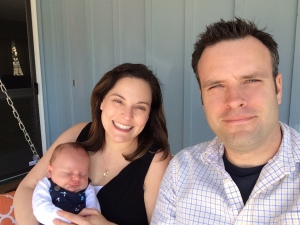 Even the red eye to Detroit reserved an entire row for me to stretch out my knee. I see an orthopedic surgeon later this week, which I arranged from Seattle, but really, the knee, the brace, the crutches, the constant need for ice packs…none of that made much of an impact on my trip. Well, except everyone was extra nice to me. That was pretty cool. 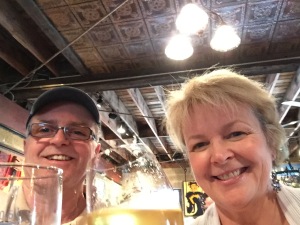