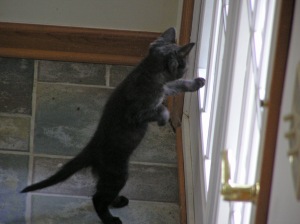 They met under the old oak in Town Square at the stroke of twelve on Devil’s Night. Each of the all female feline squad gave their crime reports.

“Foiled a firecracker in my butt attempt.”

“Walked under a ladder on purpose.”

“Crossed the path of the grumpy guy living under the boardwalk.”

The Grumpy Guy was new. He wasn’t a tourist, because that season had passed. He wasn’t townsfolk either; he was a stranger, an outsider. And the cats didn’t trust him.

“Saw lights in Kiwi cottage,” Thomasina, the eldest cat, said. “Upped to window. It was him. Grumpy Guy.”

“No!” Kiwi Cottage was one of the six quaint lakeside vacation homes known collectively as Blue Heaven. Thomasina’s people owned the cottages. And now someone, a Stranger, had busted into one of the town’s beloved old treasures.

“Yes. And he had guns. Three of them. A pistol, a shotgun, and a rifle. Also a butter knife with a strange sharp tip.”

“Strange how?” Athena, next in seniority asked.

One of the youngsters licked her paw nervously. The others sat in anticipation. There would have to be a plan. It would not be easy. Humans weren’t great communicators and, despite their many feline skills, they’d need at least one, probably two, humans for this mission.

“We’ll have to crowd him down to Blue Heaven.” Crowding was a technique the cat clan had recently perfected. You circled the human and slowly moved them in the correct direction.

“But time is crucial,” Athena pointed out. “He’ll need his car. And his phone.”

“He always has his phone. I think he keeps it in his pajama pocket while he naps.”

Twelve eyes, six gold, six green, glowed with glee. An adventure, perhaps even a dangerous mission. They lifted their tails and in a straight line headed to Thomasina’s house. Thomasina let herself in her private door while the others waited on the front porch. Like a streak, she was up the stairs, on the bed, biting Daniel’s leg.

“Oww.” He swatted her. She deflected and bit him again, pulling the meat of his skin. Urgent!

“Okay, okay.” Daniel got up, left his sleeping wife, and followed Thomasina downstairs. He started for the kitchen but she stopped him with a walk across his path and a loud meow. He followed her to the front door and stared out at the other five cats.

Thomasina jumped onto the table in the foyer that held a bowl where Daniel kept his keys. She nudged them with her nose.

And so, a few moments later, a man drove slowly behind six cats trotting at a good clip toward Blue Heaven and Kiwi Cottage. Thomasina hoped when he saw the light he’d phone the police. Athena prayed they weren’t too late for whatever damage this Stranger wished to inflict on some person or persons in their town.

“Not on our watch,” Thomasina said.

Nobody had reported roaming teenagers, so they felt confident they could stop the Stranger before he pulled his bloody prank. Where had he come by guns? What did he intend to do with them? And, most important, when?

All would have been well if Daniel had called the police instead of getting out of his car and walking toward Kiwi himself. His motor and the flashlight alerted the Stranger who came to the door of the cottage with the pistol in his hand, pointed straight at Daniel. Pistols, the cats knew, were much more accurate and deadly than the other kinds of guns. Not good.

Daniel immediately raised his hands. “Hey, slow down, I own this place.”

“I know who you are. Daniel Bryman, town benefactor and all-around big shot.”

“And you are? If you need a place to stay, I’m happy to lend you the use of the cottage.”

“Oh I bet you are. But I’ll be wanting more than a cottage.” The Stranger had his eyes trained on Daniel and didn’t notice the cats as they moved into position. “I’ll be wanting those keys to your house. After I kill you, I intend to pay your wife a visit. She’s already in bed? Just where I want her.” The Stranger leered and Thomasina read his filthy thoughts. If only she had this power for more than one night a year she would have known months ago the Stranger had developed an obsession with Eva, Thomasina’s other person. He wanted her, and the gold coins, jewels, and paper money in the Bryman safe, too. He didn’t care that he had to kill Daniel for his prize.

Clearly, there was no time for police. Clearly, action had to be taken immediately. Thomasina howled, her teeth gleaming in the moonlight, sharp as razors. She lunged upward toward the gun arm of the Stranger. Startled and hurt as she bit down hard, he dropped the gun.

“Shit.” The Stranger clutched his arm, looking for his attacker, but Thomasina had already dissolved into the night.

Daniel was phoning 911 instead of trying to get the gun so as the Stranger, still clutching his injured arm, went for it, Athena pounced on him with the weight of six tons. She held him pinned as the four youngsters used their many skills, eyes burned holes like cigarette scars into the Stranger’s trigger finger. Tails whipped like barbed wire across his face and eyes. Poisonous claws clamped onto his neck.

By the time the police cruiser arrived, the Stranger had been well and truly subdued. And the cats were rewarded with cream, fresh tuna, and a splendid, well-deserved nap.

*Thanks to Kris & Jim for photo of Ariel