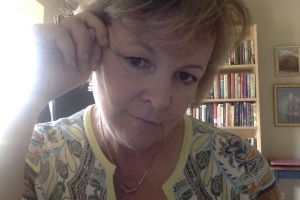 Openness, conscientiousness, extraversion, agreeableness, and neuroticism. Mix these five ingredients, psychology says, and you have the human personality. Add intersections of relationship and environment and the impact of each trait lessens or heightens. And none are all good or all bad, either, although the word “neurotic” has never been a favorite of mine. Much to my surprise, I recently learned that because I have, at times, suffered acute anxiety to the point of panic, that’s part of my personality. And the phobias that have been part of my life for so long are part of being neurotic, too.

Everyone suffers from anxiety. Neuroticism, like all the traits, is a spectrum, everyone falls somewhere on it. I just happen to be left of center. Way. Or I was. I’ve been getting better and that’s because without understanding why or even what I was doing, I was working on it, intuitively.

My wedding anniversary was this past weekend. There I am in a photo on “the day” happy not to be cooking but not really looking all wedding anniversary happy. That’s because my marriage has been going through some changes. It seems that as my anxiety lessens, and I confront each of my fears and face them down, my marriage takes another hit. Which is ironic because my husband is the one who first led me to seek help. We were driving and I couldn’t catch my breath. I was telling him I was scared and could he slow down as I held my hands in front of my face. “What, do you think we’re going to die?” He was really angry. “YES!” I said. “I think that. It feels like that.” A beat of silence. “Well you’re just crazy. You better go see somebody.”

Neither of us knew I was having a panic attack brought on by a phobia related to driving. He just knew crazy when he saw it. So I made an appointment with my doctor, who referred me to a psychiatrist. Lovely woman. She gave me the information, and the help, I needed for that particular phobia. I also learned that it’s really not crazy to be afraid for your life if someone is driving drunk or high, if there is black ice or a blizzard or a severe rainstorm. Those are pretty natural reactions to driving in dangerous conditions. Beyond the pale, I had those kind of reactions all the time, for no reason. But I kept at therapy, and I got better.

After psychotherapy, I started to crave calm. I’ve always been impatient and anxious, busy and social. Those things didn’t feel so right anymore, so I took up, and have kept up, yoga, meditation, prayer, visualization, nature walks, vegetarianism, periods of retreat, alcohol moderation, and yes, medication for when the panic gets severe. After 25 years, I have crossed several former phobias off my list. I am no longer afraid of speaking in public, flying, or heights. I drive with very little anxiety except for brief flashbacks due to a recent accident that totaled my car and bruised my body and mind.

That’s my history of anxiety. What I didn’t know was that my problems took a toll on my husband. And my marriage. He is not a nurturing type. He’s not given to huge emotional gestures. He really doesn’t get it or me and even after all these years I cope alone, which is fine. He never asks me for help with his personality issues. Or anything else, for that matter. He actually likes being in charge of stuff. Which has led to some problems now that I’m sliding more toward normal on that neuroticism spectrum. Because now that I’m less focused on my own wellness, I want to help decide the wellness of our future.

Neuroticism never defined me. I have other, better, stronger traits that have led me to follow my dreams and do some things I never imagined. Persistence is part of “conscientiousness” which really just means you finish what you start. Like that novel. Or you do what you say you will, like send the finished novel to publishers. I have that persistent thing in vast quantities, which helped me publish my books way more than my writing skills.

Twelve years blogging? Again, that’s just me following through. Seeing something to the finish. I’m pretty open to new experiences, too. Yeah, funny for a fraidy cat. But I never jump in the water fearing sea serpents. And I’ve never met one yet. So, I’m not an extrovert. I do a great imitation of one. Even I didn’t know I was an introvert until Myers-Briggs told me so. And it’s a good thing I am, because writers need a lot of time alone. Those words take time to put on paper.

You might thing agreeableness is a wonderful trait. I have a lot of that and it’s caused me as much trouble as the phobic stuff. Because when you always say yes, some of those things you are yessing to are things you should be no-ing. And my Mr of 29 years now doesn’t much like the word no coming from the lips of his formerly compliant wife. He doesn’t much like some of my ideas for changing things up in this relationship of ours. And I can’t believe how long I lived with things the way they were. Bet he wishes he never called me crazy.