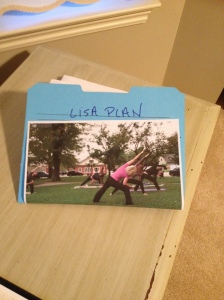 I have this secret book project with my best friend, Lisa. Well, it’s not so secret anymore, because I’ve been talking about it a little bit online, because someone asked about Monday’s post, “So where’s the book?” and I can’t just not answer a question like that, especially as there IS a book. We wrote it together and it was the easiest thing I’ve ever written.

Of course, we only wrote the first draft, and revision can be a bitch, which is one reason why the book has not seen the light of day until now … Monday I wrote a sort of introduction, because, really, as I told her all along, this is Lisa’s book. She wrote most of it, shared resources, and developed recipes, too.

So yay, another book. Another completely different book in a totally new genre. (That seems to be my pattern.) My first, my only, ever, book collaboration. Working title: “Lisa Plan” because people steal titles all the time and hers is really good. How do I know people steal titles? When I wrote Sugar Shack I checked Amazon for other novels with that title. There were none. And I blogged about Sugar Shack sharing the title and by the time I was ready to publish it, there were several novels with that name. Hey, it could have just been a zeitgeist thing, not accusing anyone, but since then, I’ve kept titles (mostly) under wraps. And Sugar Shack became Sister Issues one minute before I hit “publish” on KDP:)

Should You Collaborate?
I have been asked to collaborate many times by many people. These are well-intentioned innocents who have an “awesome” idea and they want to tell me the story then have me write it down. When it makes a million, we’ll split the profits. Well, no. Because everyone in the world has an awesome idea. That’s a perk of being human. We’re ALL creative. But I have more than enough of my own ideas, and while I did listen to my mother’s story about a woman who was born a queen in the time of Henry the Eighth and was reincarnated in our own time with all kinds of twisty stuff happening, and while I was fascinated by it, it was not a book I had the least interest in writing.

Yes, I told my mother no. But she got her own back because by far the biggest and most enthusiastic response to any section of Your Words, Your Story is the children’s story my mom wrote but couldn’t finish. She asked me to help her, and I did, but only ten years later because I wanted to put it in my own book. People love that story and she’s published, so I worked good karma for Mom, since she obviously gave me the writing gene.

As dubious as I’ve always been about collaborating, I’m doing this because I believe in Lisa’s Plan. It worked for me, and I think it will work for others, too. Also, it was damn easy.

The How
I said it was easy, but how did we do it? Well, the asking questions part was easy for me because I’m very curious. Lisa lives in another state so we did the entire book through email. I’d ask a question or tell her my latest roadblock (usually involving sugar or Chardonnay) and her detailed, thoughtful responses to my questions must have taken her tons of time, but she always came through for me. When I first started asking her about how she’d lost the weight and found new energy, it was simply as a friend asking advice on a personal journey toward better health.

I don’t know when in our correspondence we realized we had a book. Or which one of us realized it. Probably not me because I’m a novelist. Or so I tell myself even as I blog and work on my second non-fiction book. I really don’t have time to revise the Lisa Plan right now, but I wanted to blog about it, and Lisa said “go for it.” She is so easy to work with. It’s not even work; it’s a labor of love. So that is the execution. Find a topic of mutual intense interest, ideally with one person acting as student and the other as teacher, email about it for several months a couple of times a week, and print those babies out. No time to revise? Blog some chapters once a week. 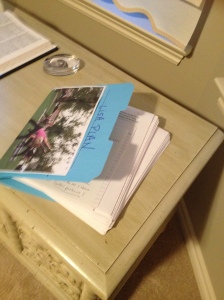 And something new to blog about.

I know what some new writers are thinking: somebody will steal your idea. They will rip you off and publish it as their own and then where will you be? Here’s the answer to that: it’s already ours because anything I write on this site is copyright protected by the government. It’s easy to prove by the date stamp who wrote this book first. Also: every single one of my published books is available free on pirate sites. It’s kind of like the new normal. Napster for novelists.

People don’t bother to put their name on your words so much these days, although that’s happened to me, too. More often they just wait for the book and then upload it somewhere for free. My publisher is vigilant about taking its authors’ work down from these sites, but usually, after that happens, the book pops right back up on another pirate site.

Plus, I’ve never been the cautious type. I say let’s move with the world and not worry about the rest of it.

You may feel differently, and that’s your call. Actually, I’m already getting input from readers on things they’d like to know about, which is helping shape the revision of the book. Someone mentioned SUGAR which is huge in our collaboration draft. Someone else talked about EXERCISE and another person bemoaned MENOPAUSE. All covered, but I’m taking notes and if there’s something you want to know as this plan unfolds every Monday right here, just ask. If she hasn’t answered it already, Lisa will do some more deep thinking. Saving the world one pound at a time.