Yesterday I finally got out to look again beyond the lanai at all the flora. I needed the soothing vibrant colors and the sun after a slight accident when my slipper caught on the venetian blind and I lost my balance. Landed on my well-cushioned butt. It still hurts! My neck too. So as an exercise in appreciating what I have, I took my photo stroll. The banana tree above is in the side yard. It’s a lush yard full of palms and flowers and lest you feel my life is paradise, I ran into some trouble when minutes later I ventured out on my first solo trip to the local grocery store just down the road. All would have been fine if I had not turned the wrong way leaving the store. I figured out what I had done when I passed the paint store we’d shopped at. I knew it was the other way. So I pulled onto a side street; I knew my house was in there somewhere. I clicked on my phone map. In that nano second, I hit a mailbox which went flying everywhere.

Put the car into reverse to fess up and as I looked in my rear view mirror I saw a very large man in his driveway with his hands on his hips and a disgruntled look on his face. I carefully drove in and he turned out to be very nice, as was his wife. But they called the police, who did not issue me a ticket, for which I am eternally grateful. The homeowners, meanwhile, had stored my frozen food in their freezer and my perishables in their fridge. (They had an extra one in the garage.) While the report was being written up they had me come in and sit down and gave me water. Very kind. Al (on phone) talked to the mailbox owner who said this was the third time his mailbox had been hit so he had specifically used concrete to anchor it. It would be expensive to replace. Al is repulsed by the word “expensive.”

But the important thing was no one was hurt. “It was just a mailbox” the owner said when I kept apologizing. He said he was just happy I was okay and that I didn’t try to speed away! He was wondering if he’d have to chase me down. The reason they called the police was because I had a Michigan license plate, a Michigan car registration, and a St Pete address on my driver’s license. Nothing saying I lived where I said I did. So it seemed a bit suspicious. I believe I said I’d drive him to my house and show him the deed, but he declined.

Back home, Al was pissed. Of course he was. I’d just been in an accident in the bedroom a few days ago and when I confessed I’d taken my eyes off the road in front of me for one second, he was steaming. Unlike the hot tub he was supposed to be warming up for me! “So this is my punishment?” I asked. Listen, it’s been stressful. We moved twice this year on our own. Now with his stitches (never mind, he’s fine, and he would kill me twice if I told a story about him. Yes, he reads this blog now! Sometimes.) So anyway, he could not carry in the heavy groceries as he usually does. With my butt, my neck had also been whacked. Or my head. This is accident one in the bedroom, not accident two in the car. After I accused him of torture, he turned on the hot tub and we went in.

All my pain and trouble instantly dissolved. My butt didn’t hurt anymore, nor did my neck. I was buoyant! The bubbles were soothing. Al came in and we enjoyed an interlude of peace. Later, I grabbed the bar to get out and it was wet and my grip was weak, so I slipped right under the water, head and all. I never learned to breathe underwater but I’m okay. It’s a spa, not the ocean. 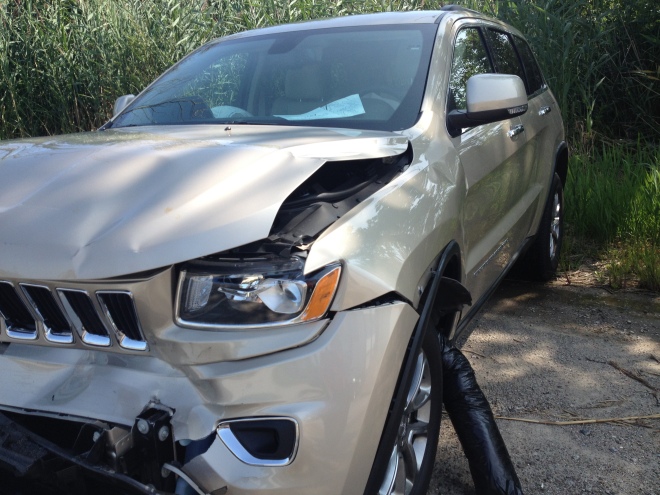 A happy auto accident is when nobody gets hurt. That’s what emergency people kept telling me when this happened to me last weekend. At first, I didn’t see it that way. My Jeepster was new with only two thousand miles on it and, as I told one of the sweet police officers, I had my last car for ten years and never even dented it. I’m not usually attached to my vehicles. I like a nice ride, sure, but the Jeepster was my first car crush. So I was a little heartbroken.

And, as usual, when disaster (as I then saw the accident) struck, I was alone. My two best friends in town were unavailable. My husband was gone on a long weekend. I myself was headed out of town on an adventure of my own. My bags were packed. I hadn’t even hit the village limits when bam, the Jeepster hit a car in front of me and my air bags unpacked. The results looked like this arm and leg shot, but more all over my body. The arm (on left) is an air bag burn. The leg (on right) is just a bash.

They are nice shades of purple and yellow now. Healing and hurting just a little bit. That night, they didn’t hurt at all. After it was determined that everyone was okay and I was not getting a ticket as really the guy had slammed on his brakes so fast I didn’t have time to react, after I had unbelted and removed my overnight bag and checked my Mac to make sure it still worked (priorities!), I decided what the hell. The Jeepster was done for and I needed a rental. My bags were packed. I might as well continue on my journey 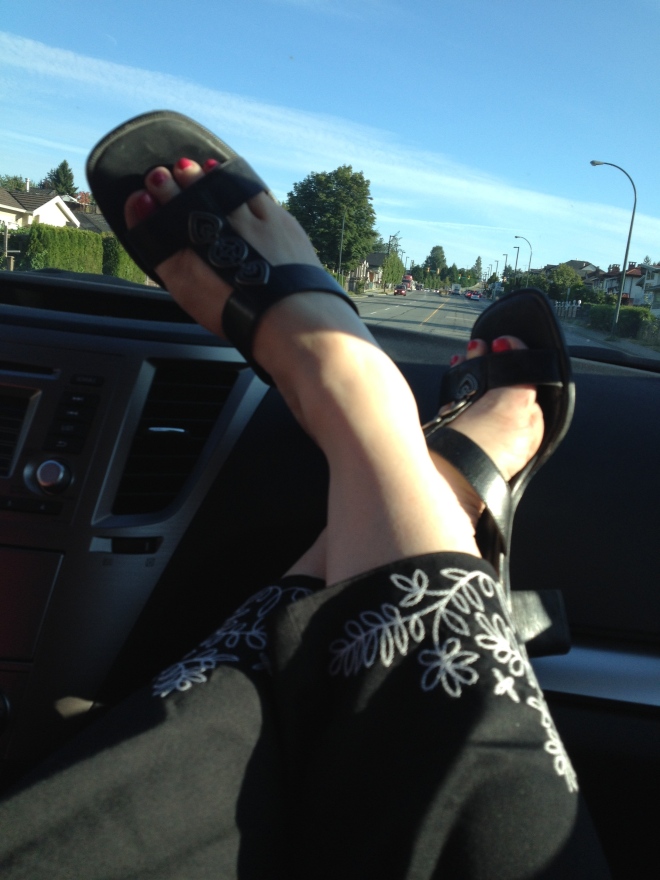 EMT and police, even the tow truck and car rental guy, everybody thought this was an okay idea. My first instinct had been to go home and hide under blankets in bed. But then I thought about that empty house, and I just didn’t think it was gonna be good to go there. I needed to move forward with my plans. So I did. I was maybe 90 minutes late for check in and I was famished. No time for writing before dinner, but I did have an emergency vodka (mandarin orange!) on hand, so I poured that over ice and pressed my not-jeans. Yes, this picture is BEFORE the accident. But they are the same pants. I call them my Jack White pants because they remind me of him.

didn’t have the foresight to realize this was going to be a photo blog, as I don’t do those. But I always admire my friend Sharon’s photo blogs, and I did take SOME pictures, so I thought, well if I have to write about this, and I do, I’ll do it a little different. So thanks for the inspiration, Sharon! I only took this photo of myself for my dear friend Bodicia, who encouraged me to take a solo trip when I wavered. She gave me specific instructions on the delicious meal I should order and the wine I should drink and the snap I should take and send to her. So I did.

You can’t tell but my face has so much concealer on it (my nose and cheeks looked like my arm, red and raw) and it looks puffy to me, too. I had a very attentive waiter and a wonderful dinner. I let him treat me like royalty. I felt so good; I can’t remember the last time I felt that good. (Well, yes I can, but I’m not sharing.) I was, without a doubt, in shock. But I didn’t realize it. I just sipped my cocktail and thought, wow this is a happy place.  And I tweeted the picture of myself to Bodicia. 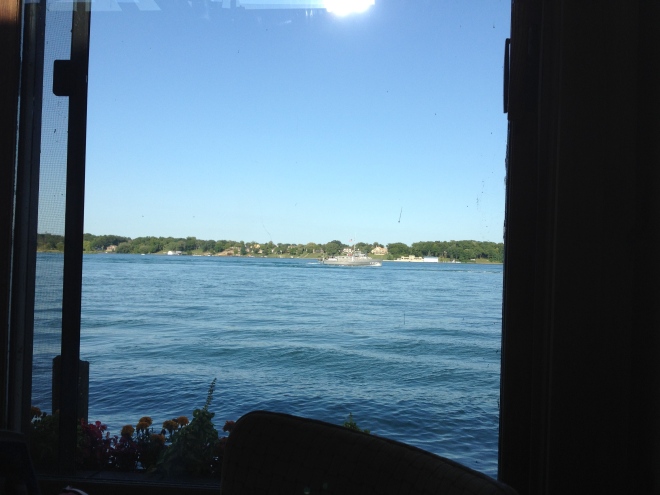 This was my view. The staff didn’t know a thing about my accident, but they gave me the best table in the house, tucked into a corner where I had full view of the room but felt private, like I was in my own little world. Well, I was. And that magic feeling I mentioned before still has not gone away six days later, even as reality crashes in. I had a few moments these past six days of feeling anxious and worried, but much more I felt cared for by some unseen force, by the universe and by love. So much love came pouring in when I posted pics of the accident on Facebook. I think I was still in shock then because somehow a sunset got in the pictures … I feel like it was a happy accident. The sun is setting on a lot of trouble I’ve been carrying with me for awhile now.

One of my friends, Laura (here with me in Seattle) had a great perspective on my wish to find meaning in the accident, writing something like, well I guess you have the answer to the dilemma we discussed over brunch last week. Laura and I had an amazing time, we’ve known each other several years, but it was our first real life meeting and within minutes I was confiding in her like an old friend and she was listening and exuding empathy. Laura (I realized all at once) was right. And clarity about the next phase of my life was not all I gained by the Jeepster’s unfortunate crunch.

I also learned to take care of myself in a way I had only taken care of others before. This is a lesson I will never let go. It has taken firm root. Call it shock, call it my sweet Aunt Louise, who said “bubble bath, lots of bubbles.” It just so happened that my hotel room had a soaker tub twice as tall as the one at home. I’ve only ever been in a taller one in Belgium. And there on the counter was a nice bottle of bubble gel. After dinner, I drew myself a relaxing bath. I’m sure it helped the next day, when I hardly felt sore at all. 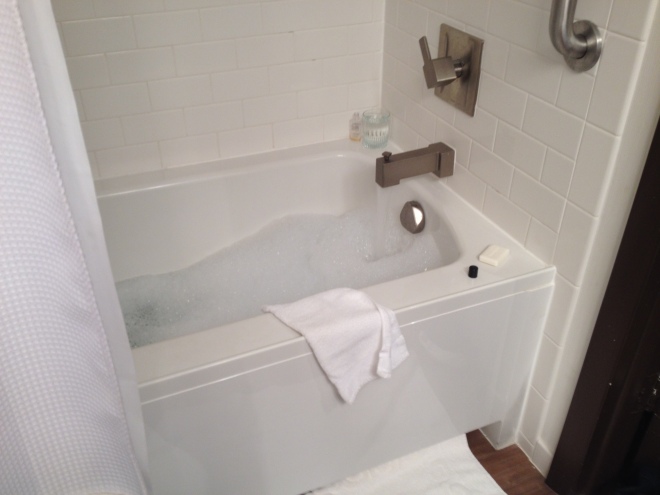 After the bath, I fell into a deep sleep and woke three hours later at one a.m. feeling so alive and refreshed. I immediately thought “this was supposed to be a writing retreat, and I haven’t written a thing except Facebook comments!” I grabbed Mac, pulled pillows all around me and got to work, writing until the sun came up. Then I took a cup of coffee outside by the water and watched rosy-fingered dawn fight its way through the clouds. And then, I checked out of the hotel and drove home, where I slept the day away and got up to do more night writing.

As it must, reality has intruded on my happy accident interlude. But what remains is the sweetness of my find, and that is more than just figuring out an answer to my “What’s Next?” dilemma. I have my answer now. I know where I’m going, and I know how I will treat myself along the way. The lessons of that blissful adventure and the feelings it captured will live long after the bruises fade.