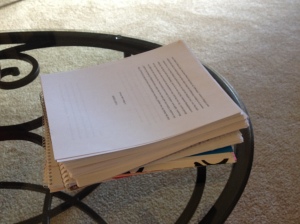 My first draft of the third Blue Lake book is finished. Took a minute to bask in the glory of getting it done today–I didn’t think it would happen but that extra hour this morning helped–and now I need to get busy with polishing up this messy first draft for my patient and kind editor.

I’ve already had help from my critique group, so the first half should be simple to clean up.

There’s still the problem of what to do about Lily. Should she get top billing over my reunited lovers? The writers think so. And this past week or two of writing, when I finally admitted that I wouldn’t even get the first draft done in October (so close!) let alone something I could send my editor, I have written far more Lily pages than Reunited Lovers pages. One thing I can do when I read it over is see which one dominates page-wise. Lily’s story has more drama. Way more. The other one is pure, if a tiny bit unconventional, romance.

Speaking of unconventional romance, Luke’s #1 Rule should be available for pre-order any day now. I thought it was a romance when I started it. And there is a love story, one very close to my heart. But my publisher has decided it is “Contemporary Mainstream Fiction” because really, I don’t write romance. I write love stories, always, but also mixed in there is more messy life. In Blue Lake Book 3, there IS a love story, but Lily’s theme is darker.

My idea for Blue Lake Book 4 takes off from where Book 3 ends and right now I want to make it sunny and bright. That’s my goal. Somehow, during the writing process, goals change. If you are writing during National Novel Writing Month, and have taken the official challenge, then you’ll have to go with that goal changing thing. A minor character might become bigger than you first thought. A romance might become a mystery. By the rules of NaNo you really just have to push on and keep writing new pages.

Some people hate first drafts, but I love them. To me, it feels like flying. I would really like to take off and fly with another first draft for NaNo. But I am not going to because I am a disciplined writer who will get down to business and finish one book before she starts another.

Once again, I’m going bend those NaNo rules to my own deviant purposes. Yes, I will write every day. I will write 50K. But they won’t all be NEW words. And it won’t be a new story. It will be the revision of a story already written. I simply like the energy around the month of November for writing. Honestly, October was tough and I could use the extra support, which is out there in November like no other month of the year. Everyone on Twitter is doing it, the blogs are full of NaNo this and NaNo that, and it truly is a truly inspiring time to be a writer.

So I’m thinking maybe if you’re reading this you might want to break a NaNo rule or two yourself. Go ahead. I’ll never tell. 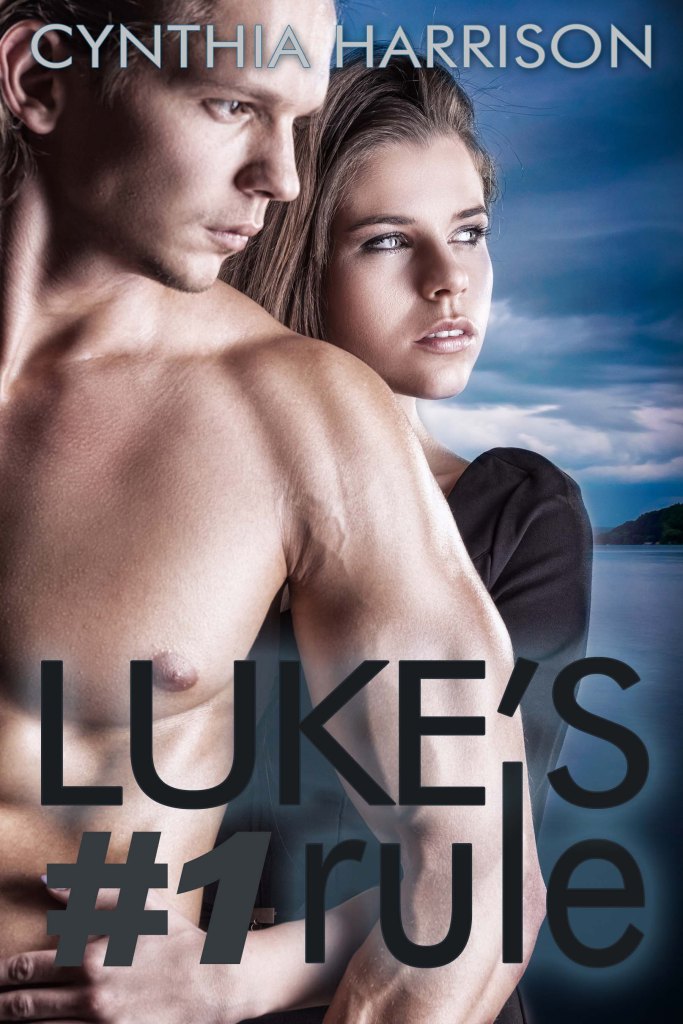 Nothing beats the feeling of seeing your story captured in cover art. At least for me, it has always been a delight.

Some of the things I love about my upcoming release cover art … well, Luke. He’s a laborer with his own landscaping business, so he comes by those muscles through hard work. The shirtless thing — this is my 8th book, it’s women’s fiction, and it’s the first time a character is bare-chested. But this fits Luke, too, since mowing lawns in the summer can be hot work and he’s been known to strip off his shirt on 90 degree days.

You might notice a darker tone to this story … that’s because it is. While Luke and Chloe fall in love, things are falling apart around them, especially Chloe’s ex-husband. This story deals with divorce, addiction, and other dark subject matter. So that little bit of a darker tone in the cover conveys that this will not be a light romance, despite Luke’s pecs:)

I love how cover artist Angela Anderson captured Chloe and got a little bit of Blue Lake into the background of the photo. I wondered how she’s deal with the title, which is a bit unwieldy. Love how she pulled the L in “rule” up to the apostrophe in “Luke’s” and how she changed up the color a shade or two on #1. I just love everything about it.

Book’s not out yet, but should be available for pre-order soon. Meanwhile, I just want to stare at the cover:)

I’ve noticed that everyone seems to be writing series these days. They’re not anything new, but seem to be picking up traction. Or maybe it just feels that way because I’m working on Book Two of a series after having written several stand-alone novels.

Yesterday, members of my critique group, especially the member who was not in the group for the critique of Blue Heaven, kept asking questions about things I’d explained in the first book. And I found myself saying that I had “covered that in the first book.” After a few of those type of phrases, I realized, oh, I have to tell it all over again. Every time. Every book in the series.

Each book must be able to stand alone. I am a reader and there is nothing worse for me that picking up a book mid-series and finding awkward clues that some person or place has been previously covered. There’s a trick to inserting series info. It has to flow naturally from the current book. No person or place should be in the current book as just a wink to loyal series readers. That just annoys me.

But I know this, too–there’s always the obligatory explaining, the need to go over the broad strokes of the series’ core people and places. Once I write it, very little will have to be changed book to book. Where I place that core info is key.

Sure, my editor would have told me that. But it’s much better that she doesn’t have to. Which is why I so dearly love my critique group.