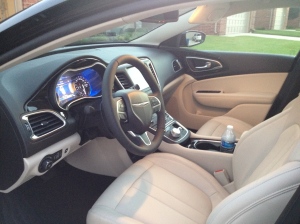 I owe my friend Sharon an apology. She asked about my new car, probably because black is notorious for being difficult to keep clean. Sharon wanted to know if washing the car was my husband’s job and I replied “my car, my responsibility” …

Yeah, but. It wasn’t always. This marriage has been pretty traditional for almost thirty years. Then everything went sideways about a year ago. Husband hated yard work and so moved us into a condo. I was okay with it because I was okay with everything. That was my role, to be okay with whatever he wanted because he was the boss and we got along better when I said yes.

So Sharon, he chose the cars, he washed the cars, he kept gas in the cars. If he wanted to drive my car, and leave me with his old rusted out truck for a weekend, he didn’t ask, he just took my car. Photo above is the interior of the car. I chose this car. First time ever. The color of the leather is called “linen.” Husband and his brother are going up north to visit his dad in a few weeks. I already said “You can’t take my car. It’s too clean for three guys. I’m sorry.” Also, I want my own car. I want to always be in the drivers’ seat.

I have a job, and I’m a writer, too, but before this change of marriage roles, none of that counted, my real job was to make dinner. And clean the kitchen. And grocery shop. And vacuum, dust, wash, fold, iron laundry, keep a tidy home, and just in general agree with his opinions, wants, and desires.

So, when we moved, it seemed normal that he bought everything he liked and I just smiled and said “that’s nice” wishing I could have had what I really wanted. Even the Jeepster. It was a great vehicle, but when he bought it, I was still saying “that’s nice” and he was still washing it (I needed a ladder to get into it let alone wash the roof) and putting gas in it. That was his job, the cars. The money. The bathrooms. Hell yes he’s a liberated man!

So Sharon, little by little all of this stuff started to occur to me. Little by little, like with the bathrooms (my idea!) I started to assert an opinion here and there. Not warmly received, let me just say. I demur pretty quickly, even now. But I want a more equal relationship. So after the crash, I said I wanted to choose my own car. First time in the history of car ownership here at this house. Earlier this summer,  I wanted to choose my own new laptop. (Electronics were his responsibility). And I did. I chose the laptop and the car.

So he was not happy with my choices but he’s living with them. He’s not helping me learn anything on the Mac, which is fine, I bought classes for a year and I am a good student and these people don’t yell at me, say they don’t have time, or otherwise put me off when I need something done that I have no idea how to do because it is a man job. I’m finding out about man jobs because I’m doing everything for myself now.

It’s not that much different. But I will be running my car through the cash wash from now on. Just wanted to tell you and maybe some other women (hey, men too) who might be thinking about re-defining their marriage roles. It’s not easy being equal.